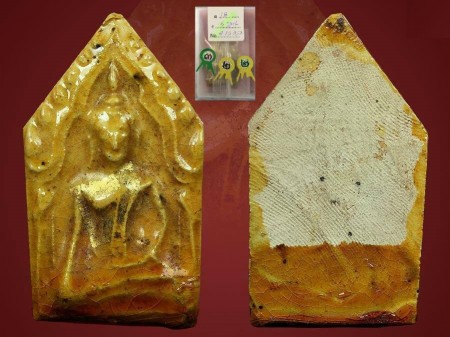 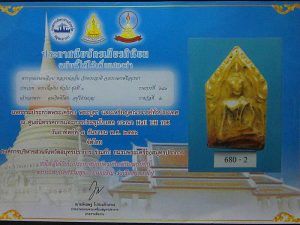 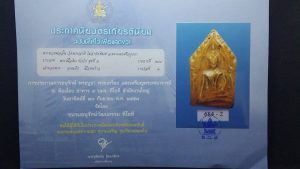 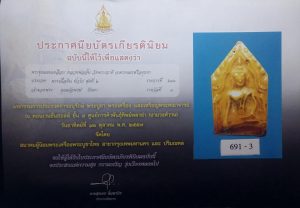 Luang Phor Aant (or Luang Por Un), the former abbot of Wat Prayatikaram, Ayudhaya Province, was without doubt the most distinguished devotee of Luang Phor Glaan, the sacred abbot of the temple, famous for his sacred sciences and amulets. Whilst Luang Por Glaan was still alive, he would always appoint Luang Phor Aant to oversee the production of the amulets and after the amulets, which were finally blessed by Luang Phor Glaan himself. After Luang Por Glaan had passed away, Luang Phor Aant himself commanded much respect from the people as the natural successor to LP Glaan. He created many amulets, having learnt the art from LP Glaan. Probably his most famous of all was his Phra Khun Paen Klurb, the amulet featured here.
LP Aant made this Khun Paen by mixing the ground broken antique Khun Paen amulets of Wat YaiChaimongkol. One of the reasons that this amulet is so popular as it is as efficacious as the original antique one. Wat Yai Chai Mongkol was one of the most famous and prosperous temples during Ayudhaya dynasty, but was burnt and destroyed by Burmese soldiers around BE2310.

After all amulets were taken from the moulds they were blessed at a number of sacred ceremonies by the three sacred monks:

Apart from this series of Pra Khunpen Klurb amulets, Luang Phor Aant also created many other series of sacred amulets including