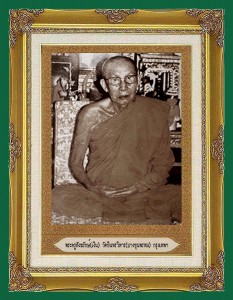 If you are looking for a seriously good mainstream Somdej amulet then those blessed by Phra Kru Sang Wat Inn, should be high on your list of possibilities. Phra Kru Sang was one of the most famous and revered monks of Wat Intraviharn, Bangkok, a temple well known for the 32-metre high, 10-meter wide standing Buddha image known as Phrasiariyametri, commonly referred to as Luang Phor To, after the great monk that created it, Pra Somdej Buddhachan Toh.

It took over 60 years to complete and is decorated in glass mosaics and 24-carat gold. The topknot of the Buddha image contains a relic of Lord Buddha originating from Sri Lanka. Wat Intharaviharn or more popularly known as “Wat In”  is located in Bangkhunphrom sub-district, Bangkok, at the nothern edge of the Banglamphoo area. It was built at the beginning of the  Ayuthaya period and was originally called Wat Rai Phrik.

Amulet collectors will be familiar with this temple due to the Somdej amulets created by Somdej Toh buried under the large buddha image, commonly referred to as Somdej Bangkhunprom. These amulets were originally created for the purpose of funding the construction of the great statue.

In fact, Somdej Phra Buddhachan Toh passed away at mid night on 22th July 1872 A.D. (2415 B.E.) in the hall for sermons at Wat IN. Wat Intraviharn has been blesed with a series of very sacred monks considered to be some of Thailand’s most revered.. Among them, Gurus like Somdej Phra Bhudhacharn (Toh) Promrangsi, Wat Rakang, Luang Phor Pu – Toh’s student and of course Phra Kru Sang whose amulets are much sought after

The history of Wat Intharaviharn can be traced back to reign of King Rama I ” where the King managed to suppress rebellion in Laos and brought members of the Lao royal family to settle in this area. One of these was Chao Inthawong, who was a devout Buddhist and helped to restore the local temple which is now Wat Intharawihan..

Somdej Toh first pioneered the idea of a standing Buddha and works began in 1867. His successor and royal student Luang Phor Pu and others finished the projects and the huge Buddha image, named as Luang Phor To,  was finally completed only in 1927.Previously Wat Intraviharn has also been named Wat Bangkunprom Nok or Wat Intraram, finally being renamed during the reign of King Rama VI as Wat Intraviharn.

When World War II broke out  many people sought refuge at the temple after the suggestion of the Supreme Patriarch of the Buddhist faith, Somdej Pra Sankaraj Pae.

Countless lives were saved despite numerous bombs falling within the vicinity liitle or no damge was incurred. It was thought that the power of the sacred statue commissioned by Somdej Toh was providing extreme protection.. Amulets blessed by Luang Phor Pu are very valuable and in extremely high demand. Even the least expensive pims will cost in excess of 75,000 Baht each, not suprsing as he was the disciple of Somdej Buddhachan Toh.Phra Kru Sung received the knowledge from Luang Phor Pu who is known to have been his mentor at Wat In. Amulets blessed by Luang Phor Sang are less expensive but just as efficacous.

Interestingly the amulets created by Luang Phor Sang and Luang Phor Pu are almost identical. It is thought by most scholars that the moulds were created by the same smiths.

The biggest difference is the amulets created by Luang Phor Pu are blank on the reverse, whilst those of Luang Phor Sang were embossed with two sacred spells known as Dokjun and Yant Ha,

Many unscrupulous individuals have erased the spells on the reverse of LP Sangs’ amulets to be sold as amulets created by Lunag Phor Pu. This incidentally has made original examples created by LP Sang rarer than those of his counterpart Luang Phor Pu, which has now led to a situation that his amulets are being faked.

Despite the fact that amulets created by Luang Phor Sang are less valuable it is generally agreed by all experts that the sacred power is identical. Phra Kru Sang blessed his amulets in B.E.2460 to raise funds to support the completion of the construction project of Pra Sri Ariyamettrai, or Luang Por Toh the famous sacred giant standing Buddha Image, initially started by Somdej Buddhachan Toh.

These pims are commonly referred to as Pra Pong Phra Kru Sang amulets and today, as in the past, are very highly respected for the sacred power to protect worshippers from danger, injury, whilst at the same time increase charm and fortune.

It is important that if you intend to acquire one of these pims you acquire a good reference book such as the one shown below and only buy from a reputable dealer who can provide all the necessary paperwork and certification.

Credits given to Chris Jones from Phra-Kru.com